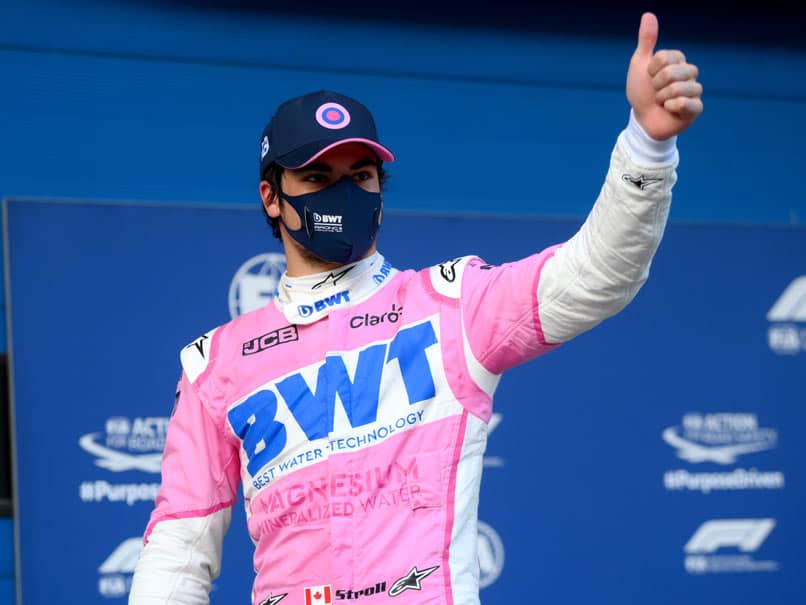 Lance Stroll delivered a dazzling fastest lap in one minute and 47.765 seconds.© AFP

Lance Stroll upstaged Formula One’s title-chasing Lewis Hamilton on Saturday when he grabbed the first pole position of his career at the Turkish Grand Prix, the Canadian saying “it feels really good right now”. The 22-year-old Racing Point driver made the most of drying conditions on a treacherous track to end Mercedes’ 13 race domination of qualifying this year. Stroll delivered a dazzling fastest lap in one minute and 47.765 seconds in the closing seconds to usurp his team-mate Sergio Perez and then resist a last surge from Red Bull’s Max Verstappen. The disappointed Dutchman was second, three-tenths behind Stroll, but ahead of Mexican Perez who claimed his career-best starting position after finishing fourth nine times in the past.

Stroll was the first Canadian to take pole since Jacques Villeneuve at the 1997 European Grand Prix at Jerez and it was the Silverstone-based Racing Point team’s first pole since, racing as Jordan, they did so at the 2009 Belgian Grand Prix.

“I can’t really put it into words,” he added.

“I’m shocked. I didn’t expect to be up here after FP3.

“There were a lot of things we weren’t sure about coming into qualifying. We didn’t look that competitive in Q3.”

His surprise qualifying performance comes after a difficult few weeks when he had to miss the Eifel Grand Prix, testing positive for coronavirus the next day.

“It has been a pretty rough ride for me so it feels good. Feels really good right now.”

This is the first time this season that neither Hamilton (nine) nor Bottas (four) have topped qualifying.

Hamilton can seal a record-equalling seventh drivers’ world title on Sunday if he prevents Bottas from outscoring him by eight points.

After Friday’s ice rink conditions on the resurfaced circuit, heavy rain ushered in even more treacherous challenges in which most of the drivers slithered and spun.

The Q1 session was interrupted twice for red flags, when Race Control declared the track was unsafe – firstly due to the conditions and then, secondly, when Romain Grosjean spun into a gravel trap in his Haas.

The interruptions added 50 minutes to the schedule as daylight receded in the appalling conditions, but the brilliant car control of Verstappen and his Red Bull team-mat Albon was on display as they topped the times, the Dutchman 1.9 seconds clear.

In the drama, Leclerc slithered through to Q2 while Hamilton, his best lap cancelled for exceeding track limits, struggled through in 14th place.

Grosjean was eliminated along with his Haas team-mate Kevin Magnussen, the two Williams of George Russell and Nicholas Latifi and Alpha Tauri’s Daniil Kvyat.

In the severe conditions, the teams were making extreme use of their tyre-warming facilities to ensure drivers could find at least some minimal grip before the rain relented, encouraging some to try intermediates.

In Q2, both Mercedes were clearly struggling to keep any heat in their tyres while Verstappen, oozing confidence, set the pace.

At the flag, the Dutchman was two seconds clear of Albon with Hamilton 2.4 down in third and Bottas seventh while both Ferraris failed to make the cut to the top-ten shootout.

In Q3 Verstappen went four seconds clear of nearest rival Bottas before Perez, on intermediates, re-set expectations by topping the Dutchman and prompting a switch of tyres for everyone else for the final surprising runs.

AUS vs IND, 2nd ODI: Do you know what impressive record Australia achieved while batting against India? Know more!

Amid rising border disputes, India to get 5 military theatre commands, 1 each for China & Pakistan

BECA: The deal that will make Indian missiles deadlier has finally been signed

Liverpool embarrassed in 7-2 loss to Aston Villa in EPL