There has been high drama in the Thalapathy Vijay camp since this afternoon after news broke out that his All India Vijay Makkal Iyakkam has been registered as a political party with the Election Commission of India. Vijay’s spokesperson immediately denied the news.

In the meantime,Vijay’s father S.A. Chandrasekhar revealed that he has sought registration of a political party in the name of All India Thalapathy Makkal Iyakkam which once again fuelled more frenzy in the film and political cirlces.

Now Thalapathy Vijay has released an official statement in Tamil that reads “I heard through the media that my father S.A Chandrasekhar has started a new political party. I am in no way directly or indirectly connected with this party which I want to make it clear to my fans as well as the public. I am in no way bound to any steps that my father takes politically” 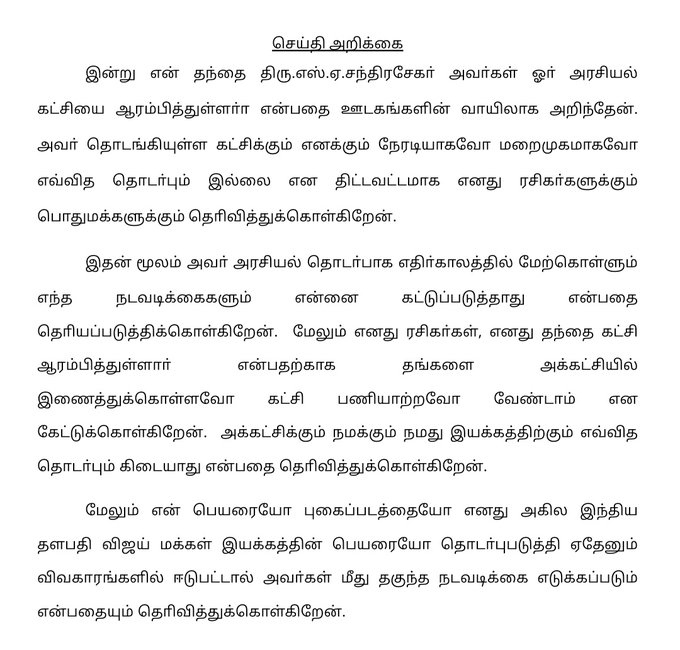 Vijay has continued “I ask my fans not to join or work for the new party because it is started by my father. That party is in no way connected to us or our Vijay Makkal Iyakkam.”

Vijay has also sent out the warning “I warn that if anyone uses my name, photos or the name of All India Thalapathy Vijay Makkal Iyakkam for any purposes strict legal action would be taken.

The statement sends out a strong message that Vijay has dissociated himself completely from SAC and his political ambitions and remains to be seen how this drama unfolds in the Thalapathy household.

Oscar-winning actor Jeff Bridges reveals he is diagnosed with cancer