Ravichandran Ashwin is the MAN OF THE MATCH for his exceptional bowling in the Powerplay. He says that most of the Delhi bowlers can bowl well during the Powerplay. States that it is important to put their hands up and volunteer to bowl in the Powerplay. Adds that he is in a really good mental and physical space, notwithstanding the shoulder injury. States that he wants to hit the nets and is eager for practice and to get out on the field and play. Ashwin says that his body is psychologically taking over many a times. Says that he does not want to stretch too much.

Shreyas Iyer, the Delhi skipper, says that he is really happy with the performance. Adds that the wicket was stopping a bit in the second innings. States that they were gonna bowl first as he thought that the pitch will play flat and is happy that things worked out in their favour. Is happy with the support staff for the way they are conducting team meetings as well. Goes onto say that they have worked hard and everyone is taking responsibilities and they are progressing well. States that they have to be consistent in their approach and they need to refocus every game.

Shimron Hetmyer is up for a chat. He says that he was working a lot on his fielding during training. Adds that the ball travels here a lot and he backs himself to take these kind of catches. States that it felt great to hit a few balls properly with the bat. Adds that he was training hard and is pleased that it worked out in this game.

Steven Smith, the Rajasthan skipper, says that they are not playing good enough for the 40 overs. Adds that the bowlers did a reasonable job but feels, they gave a few runs in the end. States that they gave 15 to 20 runs too many. Adds that they need to remain positive and the batters need to make contributions at the top of the order. Goes onto say that he spent some time out in the middle but could not get hold of one which he should have. Adds that Stokes is out of quarantine on Saturday and they will have to see if Ben can play on Sunday because he is out of match practice.

Earlier, after winning the toss, Rajasthan opted to field. They were exceptional with the ball and in the field, taking wickets, effecting run outs. They restricted Delhi to 184 and would have fancied a win. But Delhi were a step above and their bowlers executed the plans really well to put Delhi back on top in the points table. Stay tuned for the presentations…

Delhi were really outstanding with the ball. They needed to be as they were defending a rather small total, given the dimensions and prior results at Sharjah. However, they seemed to have taken a cue from Mumbai’s game against Hyderabad earlier and have pulled off a wonderful heist. Rabada picked up a 3-fer again, with Ashwin and Stoinis complementing with 2 wickets each. Nortje, Axar and Harshal shared a wicket each. Everyone scripted their names in the wicket table. And oh….needless to add, Delhi were top-notch in the field as well. Truly exceptional, especially Hetmyer with 2 catches and Rabada as well. They were a step above Rajasthan and thoroughly deserved the win.

Jaiswal started stroking after Samson’s departure but it was pretty short-lived. He perished after making 34 off 36 balls. And after that, Rajasthan had pinned their hopes on Tewatia, hoping he can pull off another marvel again. But it was not to be this time as Tewatia fell towards the end and posed no danger at all this time around. Overall, a very poor effort from Rajasthan, with the bat.

Rajasthan would have fancied themselves to ace this chase and get back to winning ways, especially at their much-favoured ground. But they lost Buttler pretty early. After that a recovery of sorts was engineered by Smith and Jaiswal before the skipper fell. Jaiswal was also eating up the deliveries and found the going pretty tough in the middle. Samson’s recent poor run of form continued and Lomror was back in the hut quickly as well.

What a win for Delhi, 46 runs, that too in Sharjah. We thought Rajasthan had bowled exceptionally well to restrict Delhi to under 190. They did but Shreyas’ men responded with a greater touch. Needless to add that they are proving to be the side to beat in this edition. 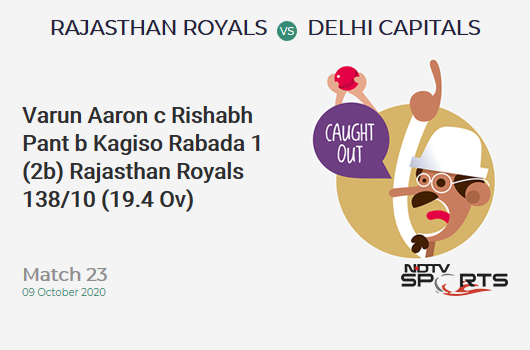 Varun Aaron is the last man in.

19.1 overs (0 Run)
OUT! DRAGGED ON! 2nd wicket for Rabada and he has been brilliant yet again! Good length ball outside off, Tewatia looks to swing it across the line but it takes the inside edge and goes onto hit the stumps. Delhi have been brilliant with the ball. 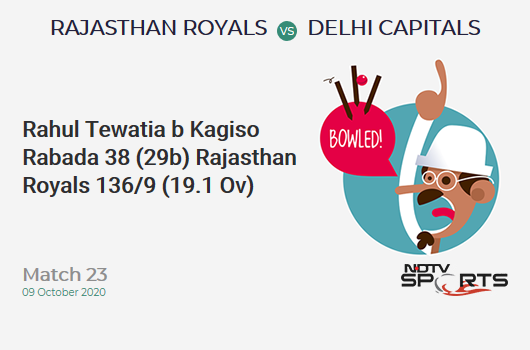 Kagiso Rabada will bowl the final over.

18.5 overs (4 Runs)
DROPPED AND FOUR! Rabada drops it and it goes for a four! Won’t matter as the game is already in the bag for Delhi. Short ball around middle, Tewatia pulls it to deep square leg. Rabada comes across and looks to catch but it bursts through his hands and goes for a boundary. 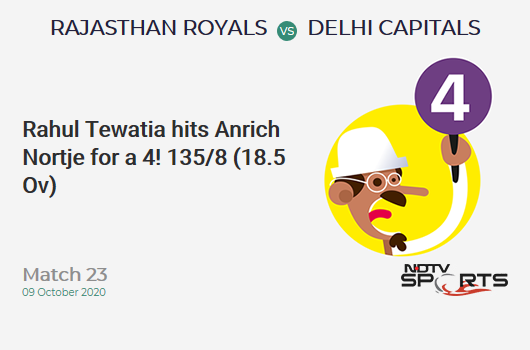 18.4 overs (0 Run)
Low full toss outside off, Tewatia drives it to deep cover and refuses the single.

18.4 overs (1 Run)
WIDE! Around middle, Tewatia lets it go. Wide given as it is above shoulder height.

18.3 overs (0 Run)
Short ball around the pads, Tewatia makes room and then pulls it to fine leg. Refuses the single.

18.3 overs (1 Run)
WIDE! Short ball down the leg side, Tewatia looks to pull but misses. Wided.

17.5 overs (1 Run)
Short ball on middle, Tewatia pulls it to deep square leg for a single.

17.4 overs (6 Runs)
SIX! Nicely played! That’s what Tewatia can do! Good length ball outside off, Tewatia slashes it over deep point for a maximum. 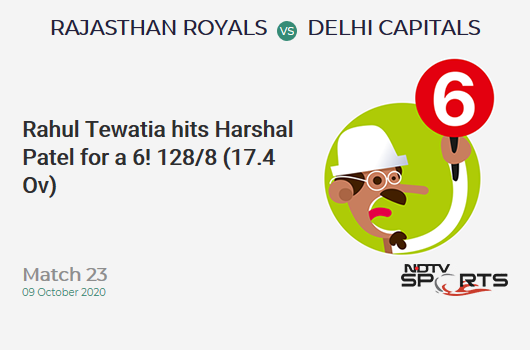 Kartik Tyagi makes his way out to the middle.

17.2 overs (0 Run)
OUT! CAUGHT! Another great catch from Shimron Hetmyer! We have seen him take great catches in this match and here is another. Short ball outside off, Gopal hammers it to deep cover. Hetmyer dives forward and takes a good catch. Gopal is waiting. The on-field umpires converge and go upstairs. The soft signal is out. The replays roll in and after a lot of replays, the third umpire gives it out. 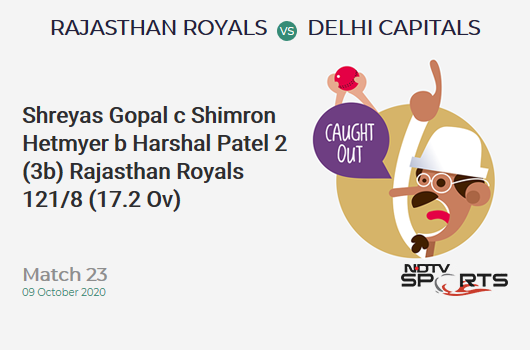 Is that a clean catch? The soft signal is out! The third umpire is taking a long time to take a decision and he finally rules it in the favour of Delhi. Shreyas Gopal has to walk back.

17.1 overs (1 Run)
Length ball outside off, Tewatia punches it to point where the fielder fumbles, allowing the batters to take a single.

16.6 overs (1 Run)
Short ball down the leg side, Tewatia pulls it to fine leg and crosses over for just a single.

16.5 overs (1 Run)
Length ball outside off, Gopal drives it to deep cover and crosses over for a single.

16.4 overs (1 Run)
Short ball on the pads, Rahul pulls it to deep square leg for a single.

16.3 overs (4 Runs)
EDGY FOUR! Good length ball outside off, Tewatia looks to drive but it takes the outside edge and goes past the third man fielder for a boundary. 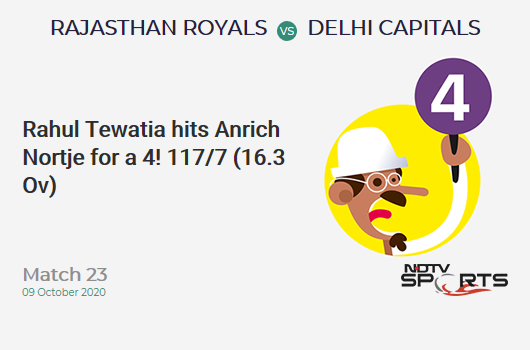 16.2 overs (6 Runs)
SIX! Just goes over the ropes! Full toss on middle, Tewatia launches it over deep mid-wicket for a maximum. 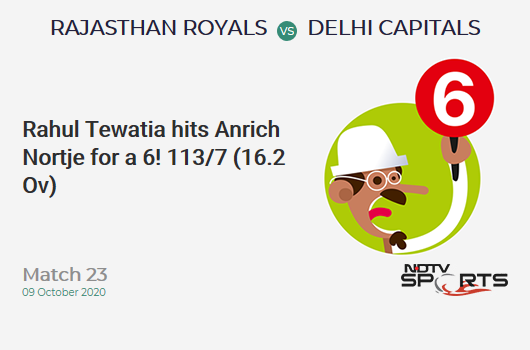 16.1 overs (0 Run)
Good length ball outside off, Tewatia punches it to cover.

15.6 overs (1 Run)
Low full toss outside off, Tewatia plays it to long off for a single.

15.4 overs (0 Run)
SWING AND A MISS! Short ball outside off, Tewatia looks to pull but misses.

15.3 overs (1 Run)
WIDE! Very full ball down the leg side, Gopal looks to flick but misses. Wide given.

15.2 overs (1 Run)
In the air… but safe! Great effort from Kagiso Rabada! Full ball outside off, Tewatia looks to go over long off. It takes the top edge. Rabada chases after it from covers and dives forward but it falls safely. A single taken.

15.1 overs (0 Run)
Short ball around off, Tewatia punches it back to the bowler.

‘We’re together in this fight’: PM Modi acknowledges after WHO chief applauds India’s vaccine efforts