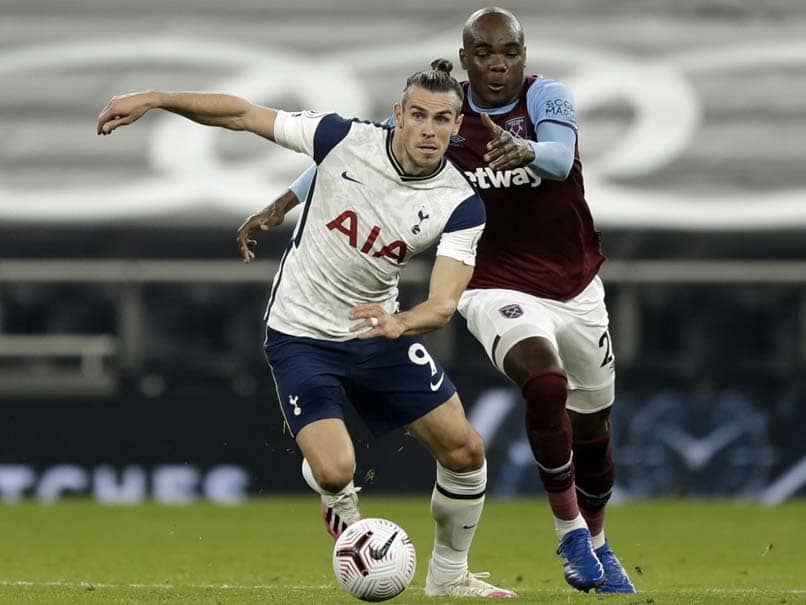 Gareth Bale missed a golden chance to wrap up the points before Manuel Lanzini snatched an equaliser.© AFP

West Ham ruined Gareth Bale’s Tottenham return with a stunning late fightback from three goals down to rescue a thrilling 3-3 draw, while Aston Villa extended their perfect start with a dramatic 1-0 win at Leicester on Sunday. Tottenham were leading 3-0 when Bale came on as a 72nd minute substitute for his first appearance since joining on a season-long loan from Real Madrid. But he suffered a debut to forget as Tottenham capitulated in astonishing fashion. The Wales star was one of the main Tottenham culprits as he missed a golden opportunity to wrap up the points before West Ham’s Manuel Lanzini snatched a stoppage-time equaliser.

Tottenham took the lead with just 45 seconds gone when Son Heung-min and Harry Kane combined to create a goal for the seventh time this season.

Kane was the catalyst, dropping deep into midfield before unfurling a majestic long pass that found Son, who cut into the West Ham area and curled his shot into the far corner.

It was Kane’s turn to get on the scoresheet in the eighth minute as he nutmegged Declan Rice and fired into the bottom corner from the edge of the area.

Tottenham’s sizzling start featured a third goal in the 16th minute, with England captain Kane heading in from Sergio Reguilon’s pin-point cross for his 10th goal of the season.

Back at Tottenham seven years after leaving for Real in a then world record deal, Bale hopes to prove he is still a world-class talent despite a long spell out of favour with Madrid boss Zinedine Zidane.

But it was West Ham who were the dominant force after Bale’s introduction to replace Steven Bergwijn.

Bale should have scored in stoppage-time, but he shot wide after bursting into the area and Lanzini made him pay with a brilliant 25-yard blast into the top corner.

West Ham are the first team in Premier League history to avoid defeat in a game having trailed by three or more goals as late as the 81st minute.

“The game was under control. We had Harry Kane to score the fourth when he hit the post, then Gareth Bale to kill the game. This is a game that was in the pocket and we lost two points,” Tottenham boss Jose Mourinho said.

At the King Power Stadium, Villa left it until the 90th minute to seal their fourth successive victory.

Ross Barkley, on loan from Chelsea, took John McGinn’s pass and fired home from the edge of the area.

Just months after avoiding relegation on the final day of last season, Villa move up to second place.

They thrashed champions Liverpool 7-2 before the international break and now sit three points behind leaders Everton.

Villa have won their opening four games of a league season for the first time since 1930-31 and boss Dean Smith said: “It is a really good start. To come here and get the win, this is a really good team.

“There are a lot of tired legs but they are getting into the season slowly but surely. We will savour what we are doing at the moment.”

At Bramall Lane, Fulham’s Aleksandar Mitrovic endured a penalty nightmare in a 1-1 draw with Sheffield United.

Mitrovic fired over with his second half penalty after Jack Robinson handled.

Ademola Lookman put Fulham ahead in the 77th minute with a superb solo effort.

But Serbia international Mitrovic was penalised for a high foot on Robinson in the 85th minute and Billy Sharp made him pay as he drove his penalty down the middle.

Alexis Mac Allister netted his first Premier League goal in the 90th minute to give Brighton a 1-1 draw at Crystal Palace.

“Good Evening From The Gabba”: Ravichandran Ashwin Has Last Laugh In Banter With Tim Paine

Australia vs India, 4th Test: Justin Langer’s “Lesson From The Series” Is To “Never Ever Underestimate India”

Thailand Open: Saina Nehwal Crashes Out In First Round, Kidabmi Srikanth Eases Into Second Round

AUS vs IND: Ajinkya Rahane Says “Don’t Know How To Describe This Victory”, Credits Goes To Each Player

Acerpure Cool 2-in-1 Air Purifier And Circulator Launched In India; Should You Buy?