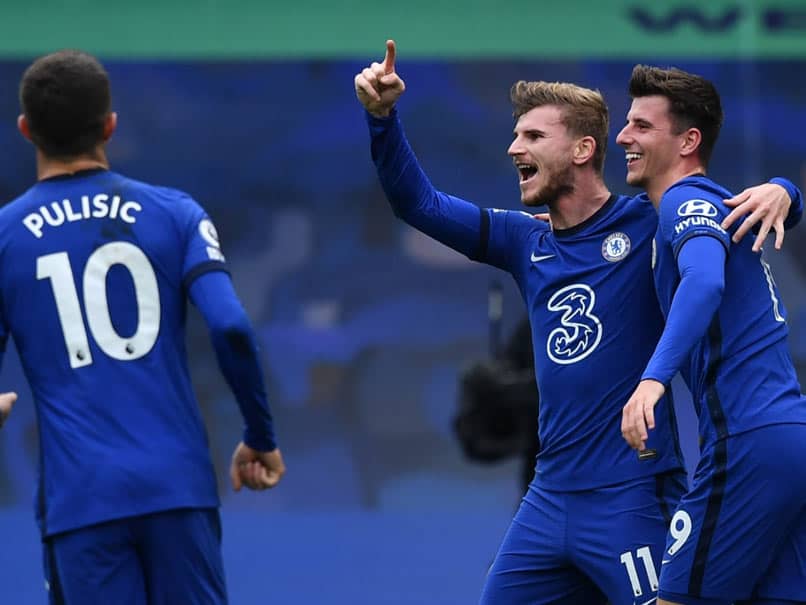 Timo Werner scored twice in the first-half for Chelsea against Southampton.© AFP

Liverpool were denied a cathartic victory against Premier League leaders Everton on Saturday when Jordan Henderson’s late strike was controversially ruled out for offside as Chelsea shared the spoils with Southampton in a six-goal thriller. Jurgen Klopp’s champions were desperate to atone for their 7-2 humbling against Aston Villa before the international break but had to settle for a 2-2 draw in an incident-packed game at Goodison Park.

Everton stayed unbeaten this season to remain three points clear at the top of the table after a number of controversial calls went their way.

Klopp was mystified as to why Henderson’s goal was ruled out by VAR.

“There were a number of big moments in the game,” he said. “The only situation I saw back is the Henderson goal and I didn’t see offside. The picture I saw is no offside, but it was offside because somebody decided it.”

Everton manager Carlo Ancelotti was delighted with his side’s performance, even though they were denied a fifth straight Premier League win.

“To know we can compete with the champions of the last season it gives us more confidence for the future.”

Sadio Mane missed the Villa Park mauling after testing positive for coronavirus and the Senegalese showed he was badly missed, with a smart finish from Andy Robertson’s cut-back to open the scoring in the third minute.

The pivotal moment came when Virgil van Dijk was on the receiving end of a dangerous late lunge from Jordan Pickford inside the box minutes early in the game.

However, no penalty was awarded after a VAR review because Van Dijk had been marginally offside and Pickford was lucky to avoid a red card.

The Dutchman’s towering presence was missed at the other end as Michael Keane equalised in the 19th minute.

Mohamed Salah put Liverpool back in front with a spectacular strike with 18 minutes to go but Dominic Calvert-Lewin headed Everton level again.

The home side were reduced to 10 men after Richarlison was shown a straight red card for a dangerous tackle on Thiago Alcantara and looked to have conceded in the dying seconds.

However, the drama did not end there as VAR deemed Mane to be offside as he provided the cross for Henderson, despite television replays proving inconclusive.

Chelsea looked to be in total control after cruising into a 2-0 lead against Southampton at Stamford Bridge, courtesy of two goals from summer signing Timo Werner.

But a goal from Danny Ings shortly before half-time and a second-half strike from Che Adams wiped out their lead.

Frank Lampard’s side rallied immediately to regain the lead, Werner teeing up Kai Havertz for a neat dinked finish to make it 3-2.

But Southampton were not to be denied and Jannik Vestergaard bludgeoned home an added-time equaliser for Saints from a free-kick that Chelsea failed to clear.

Manchester City take on Arsenal later Saturday after an indifferent start to the season while Manchester United will be desperate to make amends for their 6-1 hammering by Tottenham earlier this month.

Sergio Aguero returned for City for the first time since June but Aymeric Laporte was missing from the squad, along with the injured Kevin De Bruyne.

Arsenal were able to include left-back Kieran Tierney after his period of self-isolation due to Covid-19 protocols and new signing Thomas Partey was among the substitutes.

Will protect Vidarbha against any injustice, says Maharashtra CM