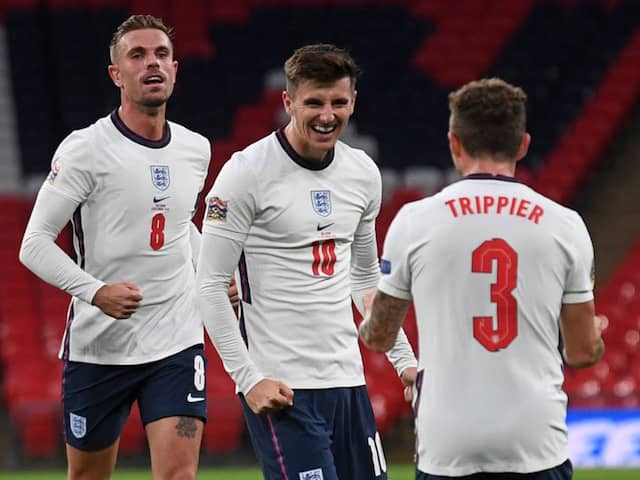 England moved top of their Nations League group on Sunday after goals from Marcus Rashford and Mason Mount saw them come from behind to beat Belgium 2-1 at an empty Wembley. The visitors arrived in London as the number one ranked side in the world, on the back of 12 consecutive wins in competitive games. Romelu Lukaku’s early penalty was just reward for a bright start by Roberto Martinez’s men. But England gained revenge for two defeats when the sides met at the 2018 World Cup, as Rashford’s penalty and Mount’s deflected winner 25 minutes from time, earned all three points for the Three Lions, moving them one ahead of the away side at the top of League A, Group 2.

England manager Gareth Southgate made nine changes from Thursday’s 3-0 friendly win over Wales with Dominic Calvert-Lewin one of only two players retained due to the absence of captain Harry Kane, who was fit enough only for a place on the bench.

Southgate was also without Raheem Sterling and Ben Chilwell through injury, while Jadon Sancho started on the bench after joining the squad late after a breach of coronavirus regulations last weekend.

Those absences took their toll on the home side, who again struggled to create chances going forward in a 5-3-2 formation lacking balance with five right-footed defenders.

Belgium were left bemoaning the lack of VAR when Yannick Carrasco had a goal ruled out for a marginal offside call against Timothy Castagne.

Martinez’s side did take a deserved lead on 16 minutes when Lukaku’s pace forced Eric Dier into a naive challenge, and German referee Tobias Stieler eventually pointed to the spot after a lengthy delay.

Lukaku fired home his 53rd international goal from the spot.

But Belgium failed to build on their lead as Kevin De Bruyne fired too close to Jordan Pickford and Thomas Meunier’s shot from the edge of the box trickled just wide.

Meunier was the culprit for England’s equaliser as he pulled down Jordan Henderson from a corner.

Rashford was awarded a MBE for his work in the fight against child poverty on Friday, and the Manchester United forward took responsibility from the spot in Kane’s absence to cap a special weekend.

Carrasco should have restored Belgium’s lead before half-time when he skewed wide with just Pickford to beat.

Instead, it was England who got the vital third goal when Mount’s shot looped high off Toby Alderweireld and dropped into the far corner.

Belgium still had the chances to go away with a point as Carrasco failed to capitalise on a great through ball by De Bruyne, seconds before the Manchester City midfielder was replaced.

At the other end, Rashford should have sealed a big win for Southgate’s men when he fired over at the end of a fine counter-attack involving two one-twos with Declan Rice.

But England held out for a morale-boosting win, eight months out from their bid to win the European Championships for a first time.