IPL 2020, KXIP vs RR: Chris Gayle Throws His Bat In Anger After Missing Century By One Run. Watch 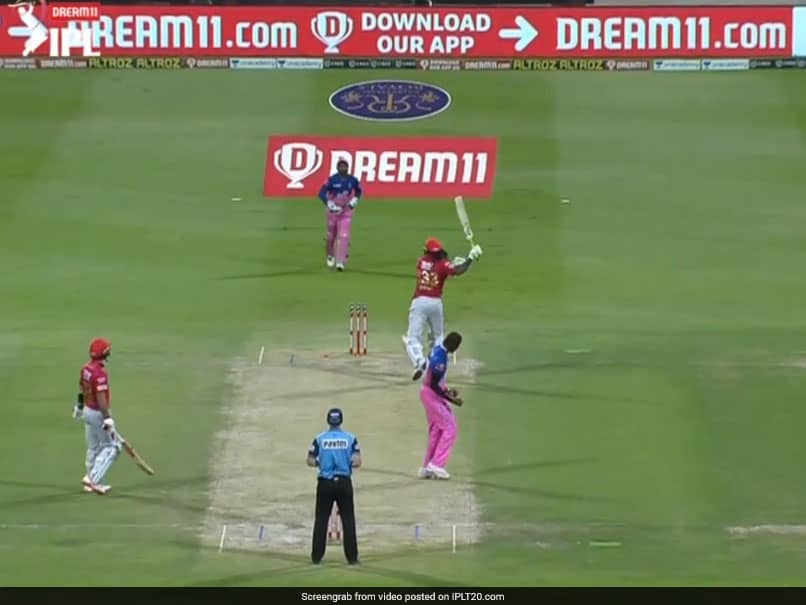 Chris Gayle missed out on a century by the barest of margins as he was dismissed by Rajasthan Royal fast bowler Jofra Archer for 99 on Friday. The manner in which Gayle got out made him even more furious and he threw his bat in anger. However, it was a rush of blood and his anger soon faded and he even shook hands with Archer while walking back to the pavilion. While Gayle failed to reach the three-figure mark, he created history, becoming the first-ever batsman to smash 1,000 sixes in the shortest format of the game. Speaking at the mid-innings show, Gayle said that it was “unfortunate” to miss out on a hundred but added that these things are part of cricket.

In the same over in which Gayle got out, he had smashed a six on Archer’s previous delivery, taking his total to 99. The England fast bowler came back strongly and bowled a full length in-swinging delivery that cramped the West Indian for room. The ball struck his pads and crashed on to the stumps, evoking Gayle’s angry reaction.

Complementing Archer for his bowling, the 41-year-old batsman from Jamaica said it was a “good ball” and despite missing his hundred he was “still feeling good”.

“Getting out on 99 is unfortunate, these things will happen but it was a good ball, still feeling good,” Gayle said during the mid-innings break.

“To be honest, it’s all about the mental aspect of my game and that’s what keeps me going. I’m enjoying the cricket the same way. I’d love to have the IPL trophy under my belt, but still a long way to go,” he added.

When asked about his 1,000 sixes record, Gayle said he was unaware of the milestone but said that he’s is still hitting the ball well.

“I’ve been having fun out there batting with youngsters and it’s a good thing. I don’t know the record (about the 1000 sixes), I’m still hitting it well. The hard work and dedication over the years have paid off. To the guys who I promised to get a century, I missed out today but in my mind, it’s a century,” he said with a smile.

Despite Gayle’s heroics, KXIP bowlers failed to defend the 185 runs, with dew making things hard for them. Rajasthan Royals players who need to win all their remaining games to stand a chance for top-half finish, came out with an intent and dominated the KXIP bowlers from the word go.