Right then! India manage to score 329 but they would know that it would not be easy to defend as the last time they got to a score like this, England belted them out of the park. The visitors, on the other hand, will back themselves to chase this down. Can they do it? We will find out as the chase begins in a while.

The bowling from England did not start off too well. They gave away too many freebies at the start and Shikhar Dhawan and Rohit Sharma feasted on it but when the spinners came on, they made comeback as Rashid sent back Sharma and Dhawan quickly and then Moeen got rid of Virat Kohli. They looked clueless once again when Pant and Hardik were going strong but once Pant was sent back, England made a roaring comeback as they did not let India get off the hook. Mark Wood looked tired but you cannot question his commitment. He ran in hard all day and was rewarded with three wickets in the end while Topley and Rashid were expensive. Overall, it is a decent comeback.

India started off magnificently with Shikhar Dhawan and Rohit Sharma going all guns blazing. They raced to 103 for no loss in no time and were on top. Shikhar Dhawan was the star with a fine knock. Sharma played well but he fell and that opened the floodgates as they lost their next three wickets in quick time. But Hardik Pandya and Rishabh Pant counterattacked and they were belligerent with the bat. Both tonked the English bowlers but they fell at the wrong time. Shardul Thakur did hit some lusty blows but just when it was time to press on the accelerator, they lost 4 wickets for 8 runs and India have been bowled out for 329.

What a comeback from England! They have bowled out India for 329 and India lost their last 4 wickets for just 8 runs. At one stage, the hosts were looking like they will reach over 350 but it was not to be as England go back to the dressing room a very happy side. England have done really well to bowl out India and they should back themselves to chase this down.

48.2 overs (0 Run)
OUT! CAUGHT! That ends the innings from India! India lose their way at the fag end to end up which could come to haunt them later when England come out to chase. Length and around off, Kumar looks to hoick it downtown but ends up slicing it up towards mid off. Curran there runs ahead and takes an easy catch. INDIA ARE BOWLED OUT FOR 329 RUNS! 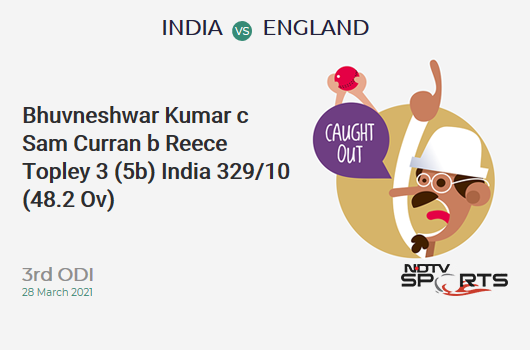 48.1 overs (0 Run)
Length and around off, Kumar slices it off the outer part of the bat to third man where it falls short of the fielder there. Bhuvaneshwar does not take the single.

T Natarajan is the last man in.

47.6 overs (0 Run)
OUT! BOWLED!  With the pace of Wood, you certainly need the experience to play and Prasidh still is new to this format. Wood gets his third as he bowls one on a length and around middle, Krishna gets himself out of the line of the ball as he looks to poke at it but the ball sneaks past the outside edge and hit the middle pole.

47.5 overs (0 Run)
Fuller and outside off, Krishna pushes it to covers.

47.4 overs (0 Run)
Fuller and wide outside off, Krishna looks to poke at it but is beaten.

47.3 overs (1 Run)
Length and around off, driven through covers for a single.

Prasidh Krishna is the next man in.

47.2 overs (0 Run)
OUT! Pandya departs! Scooped up high in the air and Roy running from point takes a good catch. Length and around off, Krunal stays on the front foot and looks to slash it over the off side as he looks to up the ante but in the end, he ends up slicing it high up in the air. Roy from point runs back and keeps the eye on the ball as he keeps his head steady. He dives ahead and takes a good tumbling catch. 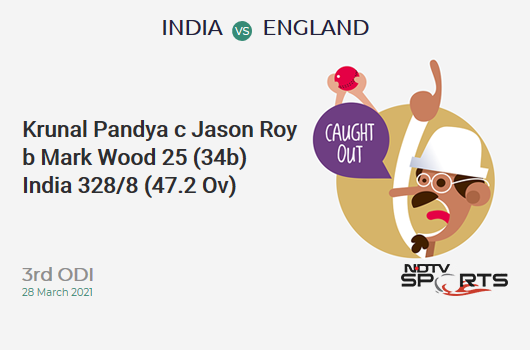 47.1 overs (2 Runs)
Fuller and around off, Pandya strokes it down the ground to long off for a brace.

46.6 overs (1 Run)
Length hand around off, Pandya strokes it towards covers for a quick single.

46.5 overs (1 Run)
Length and around off, Kumar runs it down to backward point for a single.

46.4 overs (1 Run)
Fuller in length and around off, KP plays it through covers for a single.

46.3 overs (1 Run)
Good length and around middle, clipped to mid-wicket for a single as Kumar gets off the mark here.

Bhuvneshwar Kumar comes out to bat. Reece Topley is back on.

45.6 overs (0 Run)
OUT! CAUGHT! Edged and taken! Length and around off, Thakur goes for a hit downtown but can only manage a thick outside edge which is pouched by Buttler by going to his right. End of a very good little innings from Shardul Thakur though. 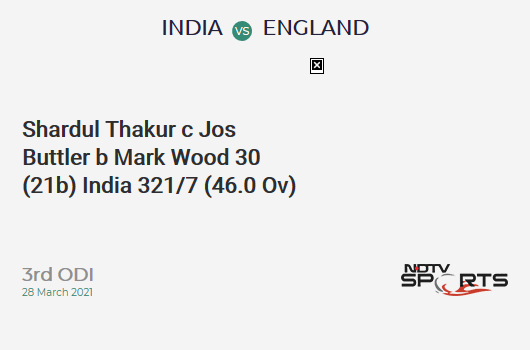 45.5 overs (0 Run)
Swing and a miss! Length and outside off, Thakur goes for a wild swing but misses it altogether. He did get off balance there too.

45.4 overs (1 Run)
Length and around leg, pulled away to fine leg by Krunal for a single.

45.3 overs (1 Run)
Short of a length and around off, Thakur pulls it to wide mid on for a single.

45.1 overs (0 Run)
Length and around middle from Wood, Pandya plays it back to the bowler.

This 21-Year-Old Student Is Accused of Persuading Her Boyfriend to Kill Himself—but Why Would Someone Do That?