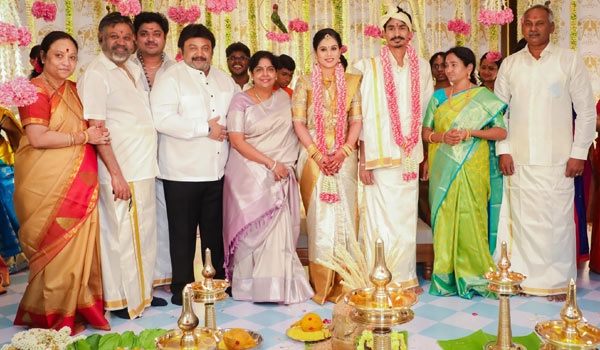 Director P. Vasu’s daughter Abhirami got married to Pon Sundar the son of Radhakrishnan IAS in a star hotel in Chennai on Wednesday morning and a reception was held in the same hotel in the evening.

Actor Prabhu, his wife Punithavathi, Producer Ramkumar and his son Dushyant graced the occasion on behalf of the Sivaji Ganesan family. Vasu has a long association with the family and has directed many films for the home banner including ‘Mannan’ and ‘Chandramukhi’ apart from Prabhu’s biggest hit of his career ‘Chinna Thambi’.

Similarly Khushbu who has acted in several films directed by P Vasu including ‘Chinna Thambi’ and ‘Riksha Mama’ attended the wedding along with her daughters and wished the young couple.

Shakti Vasu of ‘Bigg Boss’ fame the elder son of P. Vasu welcomed the guests and made them comfortable while overseing the important occasion of his younger sister’s life.

Govt. admits to not supplying food to school students as per food security law: HC