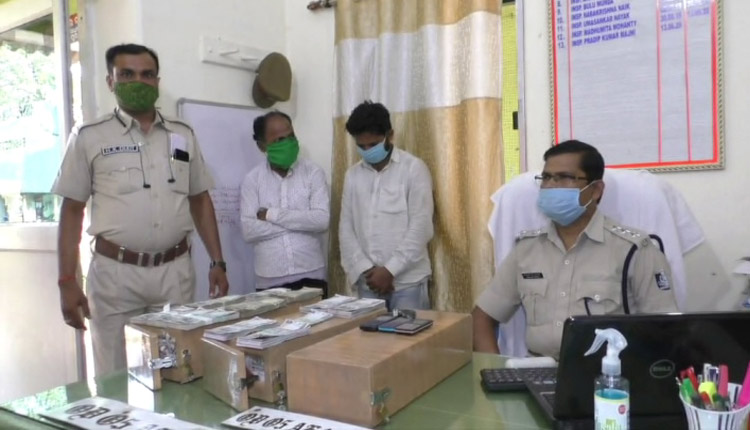 Bhadrak: The Basudevpur police here has arrested two members of a gang on charges of their alleged involvement in a money-doubling fraud. The arrestees have been identified as Priyaranjan Nayak of Mahanga area in Cuttack and Bijaya Das from Derabish in Kendrapara district.

As per reports, the duo used to target innocent victims asking them to invest in their firm and promised to return double the money that they invested. When one Nirad Das received a call with a similar offer, he smelled something fishy and immediately informed police about the same.

As part of the plan, Nirad called both of them to Nalang Chhak on NH-16 in Bhadrak where the fraudsters were nabbed by police.

“It seems a big network is operating this fraud scheme. They are asking people to deposit Rs 10 lakh to get Rs 20 lakh in return. Whatever amount you deposit, you will receive double the amount. The callers over phone inform that Sana Mahakud has huge money in his locker and because Bihar poll is underway, they want to get rid of the money by such scheme. Subsequently, the fraudsters call people to the highway and dupe them,” alleged the complainant.

The duo was arrested over refund-related fraud and extortion charges. Police suspect this gang might have cheated many others in a similar manner.

Bhadrak SDPO Sarthak Ray said, “The duo was inside the vehicle when we nabbed them after the raid. Rs 71200 cash has been seized from them. They also possessed fake currency notes with the face value of Rs 42000. All of that, apart from a four-wheeler, three mobile phones and three wooden boxes where cash was being stored have been seized. A case was registered and the duo has been arrested on charges of extortion and possession of counterfeit currency.”

Twitter has got desi competition in Tooter. And it’s brimming with memes