Right then. That’s it from the coverage of this game. The Indian T20 League action continues on 13th April, where Mumbai will take on Punjab. The first ball will be bowled at 7.30 pm IST (2 pm GMT). But as you all know, you can join us early for the build-up. Till then take care and goodbye!

Shivam Dube is the Player of the Match. He says he definitely feels happy to contribute for the first win of his team. Adds, that he has been more focused on his basics. Says Mahi bhai helped him a lot to improve his game. Says, he aimed to time the ball really well and tries to maintain the balance. Further says, he will bat wherever the team needs him to bat.

Ravindra Jadeja the skipper of Chennai says that this is the first victory as a captain and he dedicates this victory to his wife since the first victory is always special and he feels good to win after losing the first four Mentions that all the staff and management never put pressure on him and he says that MS Dhoni is always on the field if he needs help. Further adds that there is plenty of experience in their dressing room, and they keep things calm and they don’t panic.

Stay tuned for the presentation…

Robin Uthappa is in for a chat. Says everyone was just amazed as Rayudu was after the catch. After the match he said that he was happy to contribute something in this victory. Mentions, he gave some time to Dube to settle down, but once he had his eye in both decided to take on from each end and that did wonders for them. Adds, Maheesh Theekshana is coming into his own and we see him grow in confidence as the game time increases. Mentions the side will be really relieved with the two points. Says the team really stuck together during the game and the result is the best part off it.

Faf du Plessis, the skipper of Bangalore, is in for a chat. He says that while bowling they were good till the 7th over, but post that Dube and Uthappa took the spinners on, and put together around 160 runs, and that partnership speaks for itself. Mentions that they had to be aggressive which they weren’t, and Chennai used their spinners really well as well. Informs that they really miss the services of Harshal tonight, they lacked bowling variety towards the end. Says that they did not get a good start, but he is really impressed with the younger guys, it shows the batting depth they have.

Ravindra Jadeja would be a happier man after this victory without a doubt! This is the Chennai we all were familiar with. What a dominating performance by the men in yellow. Maheesh Theekshana stood out amongst the bowlers for Chennai. He grabbed four wickets and most of them came when the game was being taken away from them. It was an evening filled with mixed emotions for Mukesh Choudhary. A moment to savour as he took the wicket of Virat Kohli, but a night to forget with a couple of dropped catches in the field. Things could’ve gotten worse for Chennai but the experience of Dwayne Bravo came to the rescue, once he sent back Dinesh Karthik in the 18th over. All smiles for the people in yellow. They will try to capitalize on the winning momentum by their side.

It is never easy to chase down a huge target. Bangalore started out with a strategy of keeping the wickets in hand which would come in handy deep into the innings. The opening pair failed to find boundaries in the opening overs but did rack up runs at a good rate by running the hard yards. Although the plan took a U-turn, once Faf du Plessis perished. There was a mini collapse for Bangalore as they were four wickets down within 7 overs. The middle-order put up a solid counterpunch, which got hopes high for Bangalore but it wasn’t enough. Suyash Prabhudessai and Shahbaz Ahmed did trouble the yellow army but Maheesh Theekshana got the better of the pair. In the end, it was a huge ask for Dinesh Karthik, he put a good cameo but could not provide his side with another match-winning knock.

What an enthralling match. The South Indian derby always delivers an entertaining contest. Nevertheless, Chennai continue their domination over Bangalore in the Indian T20 League. They also get their first win of the season.

19.6 overs (4 Runs) FOUR! Mohammed Siraj ends the innings in fine fashion. Full length, on off. Mohammed Siraj drills it down the ground for a boundary. Chennai win by 23 runs! 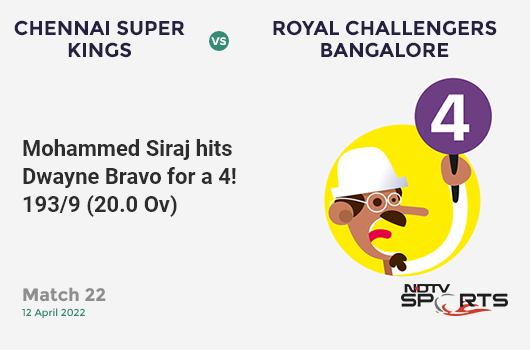 19.5 overs (0 Run) Shorter ball, outside off, slower delivery. Mohammed Siraj looks to pull this but he misses.

19.4 overs (4 Runs) FOUR! Good shot by Siraj! Very full, around middle and off. Mohammed Siraj lifts it over the bowler’s head dor a boundary. 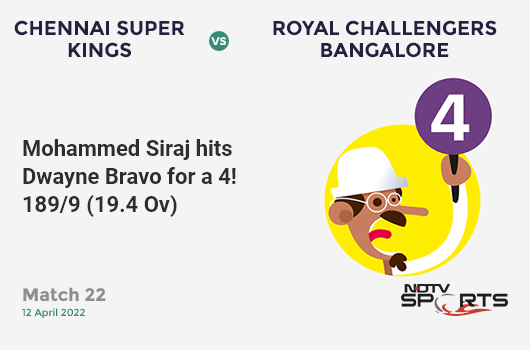 19.2 overs (1 Run) Slower ball, on a length, outside off. Josh Hazlewood taps it towards point and takes a single.

19.1 overs (2 Runs) Fuller ball, outside off. Josh Hazlewood lifts it just over Ambati Rayudu at mid off, who backtracks but fails to get to the ball. Two taken!

18.6 overs (4 Runs) FOUR! Outside off, on a length. Mohammed Siraj slashes it over cover for a boundary. 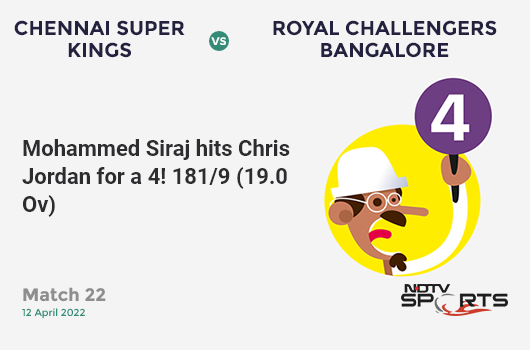 18.5 overs (1 Run) Another yorker, outside off. Josh Hazlewood pushes it toward long off for a single.

18.4 overs (0 Run) Wide of off, yorker-length delivery. Josh Hazlewood swings his bat at it but he misses.

18.3 overs (1 Run) Fuller ball, outside off. Mohammed Siraj drives it towards long off for a single.

18.2 overs (0 Run) Mohammed Siraj tries to be innovative here! A low full toss, outside off. Mohammed Siraj shuffles across and tries to go scoop this, but he ends up chipping it on the off side. It lands safely.

18.1 overs (1 Run) On a length, angling in on the pads. Josh Hazlewood looks to flick this but the ball goes off the outside edge towards point for a single.

17.6 overs (1 Run) Fuller delivery, outside off. Josh Hazlewood knocks it towards long off for a single. 43 needed off 12 balls now.

17.5 overs (1 Run) Another yorker, around off. Mohammed Siraj pushes it towards cover and takes a single.

17.4 overs (0 Run) Yorker-length delivery, wide of off. Mohammed Siraj digs it out towards short third man.

17.3 overs (1 Run) A low full toss, outside off. Josh Hazlewood pushes it towards deep point for a single.

Josh Hazlewood is the last man in. 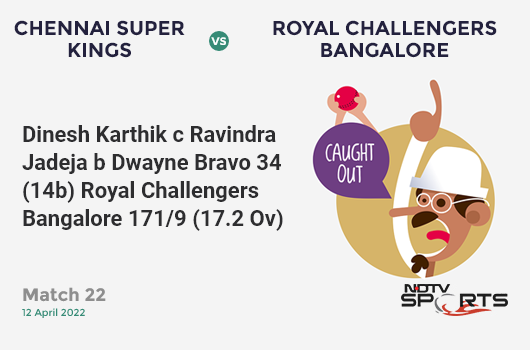 17.1 overs (0 Run) Fuller ball, around middle. Dinesh Karthik knocks it to long on. No run taken!

17.1 overs (1 Run) Wide! Slower delivery, down the leg side once again. Dinesh Karthik looks to heave this but he misses. Another wide called!

17.1 overs (1 Run) Wide! Full in length, down the leg side. Dinesh Karthik misses his flick. Wide given!

16.6 overs (1 Run) Pitches it up, outside off. Dinesh Karthik drives it uppishly over cover. Just a single. He retains the strike. 48 needed off 18 balls!

16.6 overs (1 Run) Wide! A yorker-length delivery, wide of off. Dinesh Karthik leaves it alone. Another wide in the over!

16.5 overs (2 Runs) A low full toss, outside off. Dinesh Karthik slices it aerially over cover once again. A couple of runs taken!

16.3 overs (4 Runs) FOUR! Innovation at its best! A length ball, outside off. Dinesh Karthik shuffles across, and flicks it towards fine leg for a boundary. 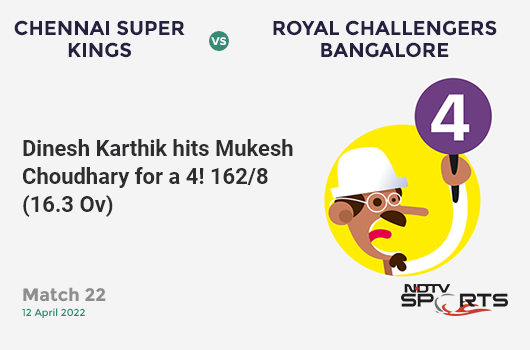 MS Dhoni quick to run across to the other side. He passes on some advice to Mukesh Choudhary, who seems to be a bit under pressure.

16.2 overs (6 Runs) SIX! Poor delivery and punished! A fuller ball, around the pads. Dinesh Karthik uses his wrists and flicks it over deep square leg for another maximum! Back-to-back sixes for Dinesh Karthik! 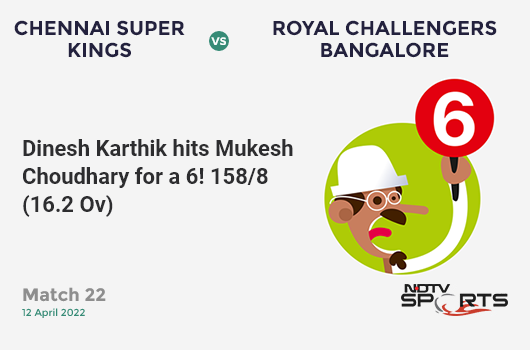 16.1 overs (6 Runs) SIX! Till Dinesh Karthik is here, Bangalore’s hopes are still alive! A shorter ball, around middle. Dinesh Karthik pulls it over deep square leg for a biggie. 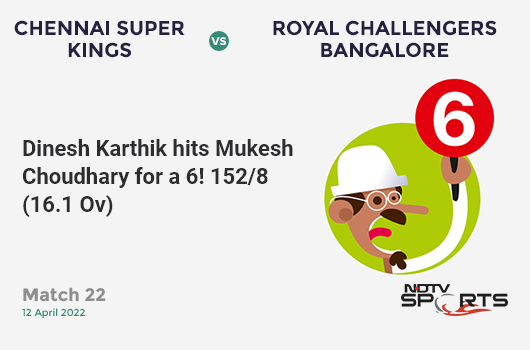 15.6 overs (0 Run) Firing it in on middle, shorter ball. Mohammed Siraj misses his flick and gets hit on the pads.

15.5 overs (0 Run) Shorter ball, drifting in on middle. Mohammed Siraj defends it out.

Mohammed Siraj comes in at number 10.

15.4 overs (0 Run) OUT! CAUGHT! WHAT A STUNNING CATCH! Unbelievable stuff from Ambati Rayudu! A fuller ball slower through the air, around middle. Akash Deep looks to flick this away, but the ball goes off the leading edge towards cover. Ambati Rayudu keeps his eyes on the ball, dives full-stretch to his right and takes a spectacular one-handed catch there! Bangalore are now 8 down!

15.3 overs (0 Run) Quicker, outside off, shorter ball. Akash Deep taps it towards point.

Strategic break! Dinesh Karthik holds the key for Bangalore but the task is too big for him to do alone and with the lower-order batters walking in, chances of any support from the other end are slim. But cricket is a funny game, so we can’t rule anything out. Chennai have the game by the scruff of the neck and would hope to grab their first win of the season. Akash Deep is the new batter in for Bangalore.

15.2 overs (0 Run) OUT! CAUGHT! Ravindra Jadeja brings himself into the attack and strikes and he grabs his second wicket of the match. A shorter ball again, around middle. Wanindu Hasaranga makes room and looks to go over long on this time. But he lifts this one with no timing and the ball goes to Chris Jordan at long on who pouches it safely. Wanindu Hasaranga walks back shaking his head, he feels he has missed out on this one! 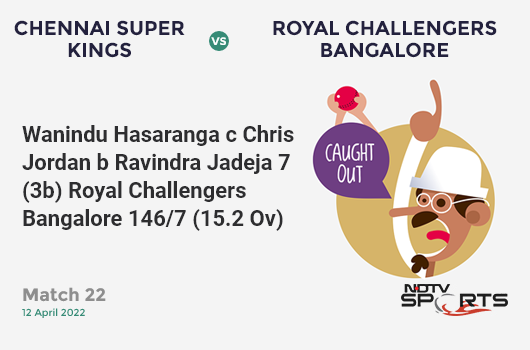 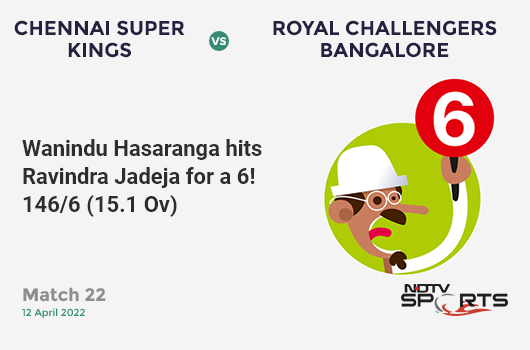 Rains may persist over South for 3-4 days