Sam Curran is the new man in.

14.4 overs (0 Run)
OUT! BOWLED! Chakravarthy got Dhoni bowled when these two met earlier as well, and now too. ‘Chakra-worthy’ it reads on the big board in the stadium. Quicker and flatter on middle and leg, Dhoni rocks back and looks to play this on the leg side. He anticipated a fuller length, tossed up ball but did not anticipate the quicker one. Dhoni misses and the ball crashes into the woodwork. 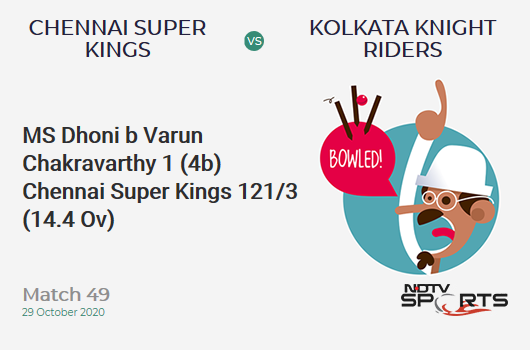 14.1 overs (1 Run)
Outside off, stroked through the covers for one.

13.6 overs (1 Run)
A single. 11 runs and a wicket off that over. Short ball, Gaikwad mistimes his pull towards mid-wicket. Gets to the other end for a single.

13.5 overs (1 Run)
Dhoni wastes no time. Underway straightaway. Outside off, he taps this towards third man for a single.

Skipper MS Dhoni is the new man in.

13.4 overs (0 Run)
OUT! TAKEN! Rayudu goes for one too many and ends up perishing. Is that the breakthrough that Kolkata wanted? Looks so, if they can capitalize on this further. Outside off on a good length, Rayudu comes down the track and looks to whack that over mid off. However, he ends up getting it straight into the hands of the mid off fielder, Sunil Narine, instead. 55 runs needed in 38 balls still for the Yellow Brigade. 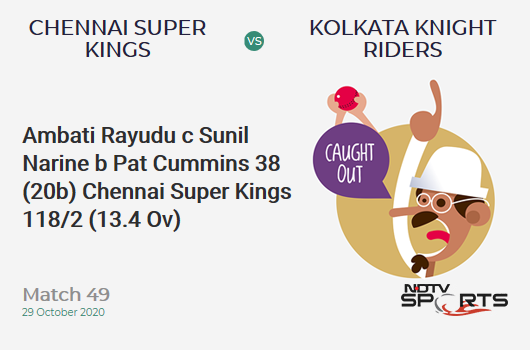 13.3 overs (4 Runs)
FOUR! This is so clever from Rayudu. Length ball on middle, Rayudu anticipated that, he moves across and gently strokes that through short fine leg for a boundary. 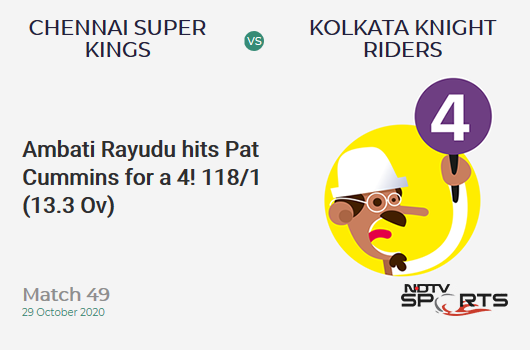 13.2 overs (4 Runs)
FOUR! Not this time though. Rayudu times it well and gets it over the inner circle for a boundary. Full and outside off, he skips down the track and lofts this over extra cover for a boundary. 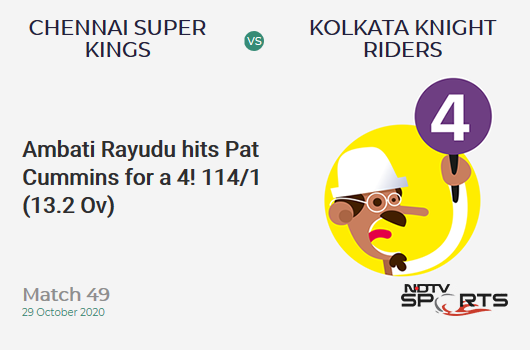 13.1 overs (1 Run)
Full and around off, Ruturaj mistimes it off the inner half to long on for a single as he looked to slam that on the off side.

DRINKS! Another fine partnership stitched and Chennai are looking pretty strong at the moment. Gaikwad has looked as solid as he was in the previous game while Rayudu has shown intent from the start and is playing a superb hand. With 9 wickets in hand, these two can take the game deep and win it for the team. The asking rate is just over 9. Kolkata, on the other hand, need to strike quickly. Let’s see who can deliver for them.

12.6 overs (2 Runs)
A couple to end the 13th over. Rayudu comes down the track, Chakravarthy sees that and shortens his length. Ambati manages to work it on the leg side off the inner half and comes back running in for the second. 9 off Chakravarthy’s third over. Chennai need 64 runs in 42 balls.

12.5 overs (0 Run)
Flatter ball outside off, Rayudu looked to steer that towards third man but ends up chopping it back on the track.

12.3 overs (1 Run)
Tossed up around off, Rayudu prods forward and nudges this on the off side for a run.

12.1 overs (4 Runs)
FOUR! Good chase from Lockie Ferguson but he could not get there. Flatter ball outside off, Ruturaj moved to the leg side and lofted it over covers. Ferguson, the sweeper cover, runs to his right and dives but fails to stop it. 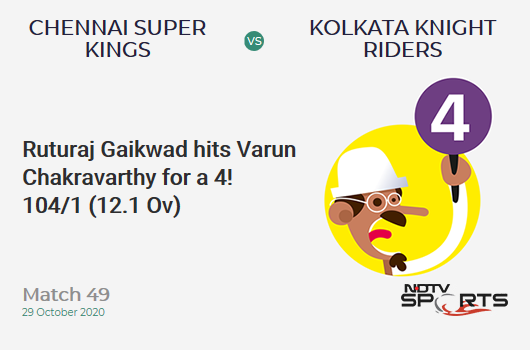 11.4 overs (6 Runs)
SIX! My goodness. What about that, Ambati Rayudu! That was some shot. Short and well outside off, Rayudu comes down the track, the width allowed him to free his arms. He clobbers it over deep cover. 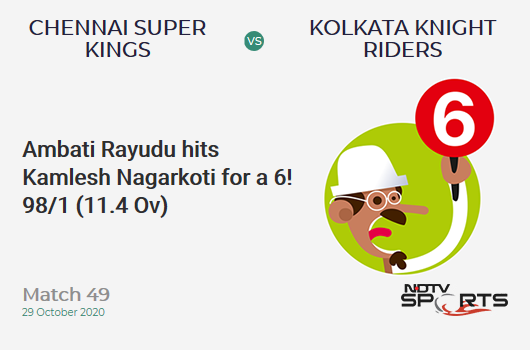 11.3 overs (1 Run)
Full and outside off, stroked through cover-point for a run.

11.2 overs (2 Runs)
Slow back of a length ball outside off, cut to deep point for a couple. Ruturaj Gaikwad gets to his half ton with that. His second in the League, back-to-back as well. Mark Nicholas on-air remarks – ‘Remember the Name’. 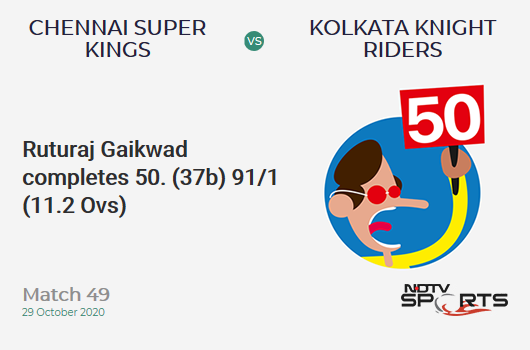 11.1 overs (1 Run)
Fullish ball around off, Ambati comes down the track to slam that on the off side but it comes off the inner half. Goes to fine leg for a single.

Will Morgan risk another over of Rana here? No, Kamlesh Naagrkoti is back. Went for 7 in his first.

10.6 overs (1 Run)
A single to end then. Full and around off, tapped towards square leg for a quick single. 14 runs off Ferguson’s second over. Chennai need 85 runs in 54 balls.

10.5 overs (1 Run)
Full and outside off, driven through the covers for a single.

10.4 overs (6 Runs)
SIX! David Hussey from the Kolkata camp also lauds Gaikwad there. Full ball around off, Ruturaj Gaikwad swivels a touch and lofts that mightily over fine leg. 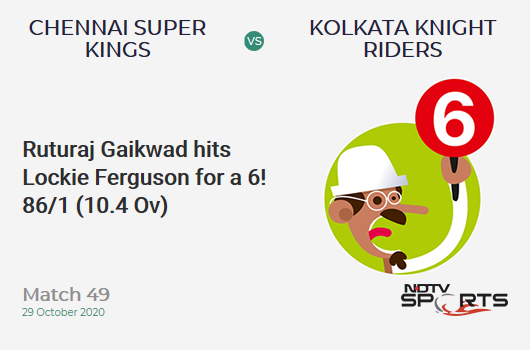 10.3 overs (1 Run)
Rayudu moves to the off side and taps the full ball towards cover-point for one.

10.2 overs (1 Run)
Length ball around off, Ruturaj jumps and tucks it on the off side for a single.

10.1 overs (4 Runs)
FOUR! This guy is a really talented kid. Full and outside off, he lifts it over extra cover for a boundary. 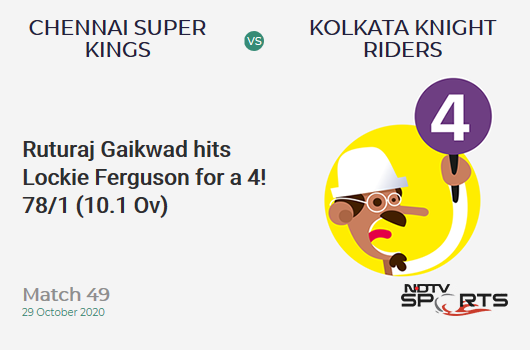