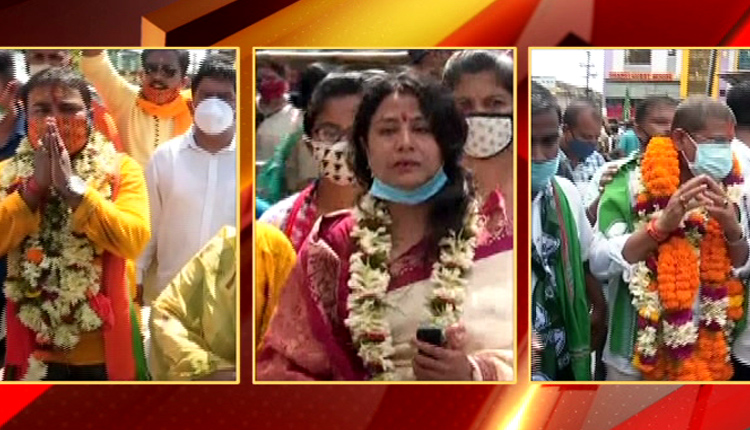 Balasore/Tirtol: With just about couple of weeks to go for the bypolls in Balasore Sadar and Tirtol Assembly constituencies in Odisha, the three major political parties in the State have now gone into the attack mode.

While the BJP and the Congress are focusing on door-to-door campaigning, the BJD is carrying out its ‘Mishrana Parba’ and conducting public meetings at villages. Besides, senior BJD leaders have reportedly camped in the Assembly constituencies to campaign for their candidates.

Manas Dutta, BJP’s MLA candidate from Balasore Sadar constituency and son of late MLA of the constituency Madan Mohan Dutta, is aggressively campaigning in the region. He has been targeting the ruling-BJD for allegedly neglecting Balasore in over 20 years’ rule.

“Almost 15 years back, Odisha Chief Minister Naveen Patnaik had laid the foundation stone for a bus stand here, but the project is yet to be materialised… What short of development can they do when hundreds of crores of rupees have been misused in the name of development,” alleged BJP MP and Union Minister, Pratap Sarangi.

Similarly, Congress MLA Tara Prasad Bahinipati said, “Both the BJP and the BJD are responsible for the shutting down of many industries in Balasore. Our fight is against misgovernance and corruption.”

Presenting BJD’s point of view, party MLA and Minister Pratap Jena said, “We always believe in inclusive development and give optimum facilities to people. We are fighting the bypoll on these issues.”

On the other hand, the BJP has approached the Chief Electoral Officer alleging violation of COVID19 norms by the BJD MLAs, Ministers and leaders during campaigning in the constituencies. The BJP has also alleged that the BJD is involved in influencing voters by distributing money.

“On the 15th, over 500 BJD members including MP Rajashree Mallick, MLA Debasish Samantaray and State minister Pratap Jena were inside a hall, violating Covid guidelines. There has been a clear violation of election code of conduct,” alleged party’s State General Secretary, Lekhashree Samantsinghar.

A Superstar to play the villain to Lady Superstar?