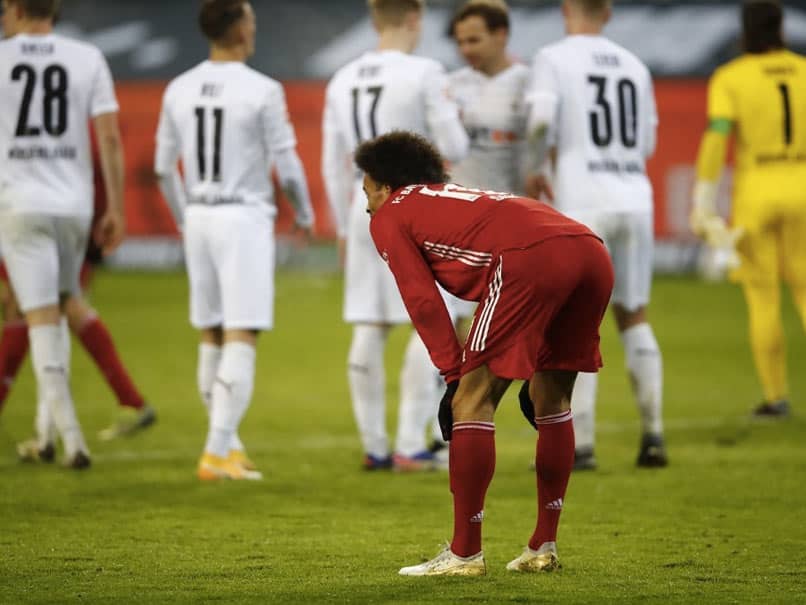 Bayern Munich winger Leroy Sane reacts after his side suffered their second loss this season.© AFP

European champions Bayern Munich suffered only their second Bundesliga defeat of the season on Friday after throwing away a two-goal lead and crashing to a 3-2 loss at Borussia Moenchengladbach. The away defeat means second-placed RB Leipzig can wipe out Bayern’s two-point lead and top the Bundesliga table if they beat Borussia Dortmund at home on Saturday.

Bayern were cruising at 2-0 up after 26 minutes thanks to a Robert Lewandowski penalty and a superb Leon Goretzka goal at Borussia Park.

However, Gladbach roared back as midfielder Jonas Hofmann scored twice to make it 2-2 at the break, then set up Florian Neuhaus who scored what proved to be the winner for the hosts just after the break.

“We’re delighted, it was a hard fight. I don’t think many people had thought we could do it, but we scored our first two goals exactly as planned,” Hofmann told DAZN.

“We knew Bayern defend high. We made life hard for ourselves at the start, but it was great that we could take the lead straight after the break.”

Bayern were punished for repeatedly losing the ball in their half as Gladbach took the chances which came their way.

Bayern started brightly, ending their curious run of conceding the first goal in their previous eight league games when Neuhaus reached down and brushed the ball with the back of his hand on the edge of the area.

After a long VAR review, the referee awarded a penalty and Lewandowski slotted home his 20th league goal this season.

Bayern were 2-0 up when Goretzka superby won the ball back in Gladbach’s half, traded passes with Leroy Sane and hit the net with a great finish.

However, the scores were level at the break as the hosts fought back.

In the pre-match build-up, Gladbach coach Marco Rose had highlighted Bayern’s tendency to defend high up the pitch, which created space for opponents to attack, and his team ruthlessly exploited the weakness.

A superb pass by Lars Stindl split the Bayern defence, Hofmann darted onto the ball and fired it past Manuel Neuer on 36 minutes.

The second goal was almost identical.

Then when Niklas Suele gave away possession to Hofmann, the midfielder dribbled on the edge of the area and passed to Neuhaus, who made amends for the first-half penalty with a brilliant finish four minutes after the break.

Gladbach defender Matthias Ginter was floored and needed medical treatment after blocking a Sane shot with his face.

In a bid to raise the tempo, Bayern head coach Hansi Flick brought on Kingsley Coman, whose goal decided the Champions League final in August, for the final 22 minutes but to no avail as Gladbach held on.

This day that year: When Virender Sehwag and Rahul Dravid fell shy of shattering a 50-year-old record by 3 runs

IND vs AUS 4th Test: No regret, I will keep playing such strokes, says Rohit Sharma

From 1991: Paul McCartney on his “Liverpool Oratorio”