Bigg Boss 14 is getting more and more interesting as only a few contestants are left inside the house. The challengers have definitely made the show more entertaining. We all know that Vikas Gupta and Arshi Khan don’t get along well. He has started giving it back to Arshi and fighting with her. There is no love lost between them. During their fights, we saw Vikas Gupta saying that Arshi Khan keeps copying Rakhi Sawant and is jealous of her. Arshi looked visibly irritated but Vikas kept repeating it. Vikas said that Arshi is very insecure and does not want people to pay attention to Rakhi. Throughout a recent episode, he kept saying that Arshi is a copy cat. We asked fans if they agreed to Vikas that Arshi is copying Rakhi. And the verdict is out. A majority 54% don’t agree with Vikas while 46% do. Have a look at the poll result below. Also Read – Bigg Boss 14: Do you think Rahul Vaidya and Aly Goni ‘bully’ those who get friendly with Rubina Dilaik and Abhinav Shukla? Vote now 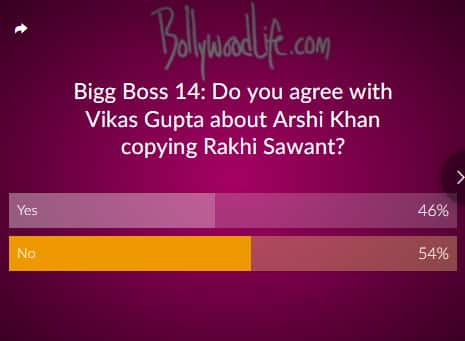 Meanwhile Arshi, who was in contact with Vikas’ mother, Sharda Gupta, was accused of blackmailing Vikas over some time now. Reacting to his claims that Arshi knows family secrets and is blackmailing him, Sharda Gupta told Hindustan Times, “I have no clue what Arshi Khan is talking about. Yes, I did speak to her two-and-a-half years back but there was nothing personal that I shared with her that she is using it against Vikas. Don’t know it might be her game plan but I never spoke anything with Arshi Khan whatsoever that she is accusing Vikas and there is such a big issue made out of it.” Also Read – Bigg Boss 14, Day 123, Preview: Nikki Tamboli to save Rahul Vaidya from nomination; Rakhi Sawant battles her choices

Arshi’s close friend Flynn Remedios told BollywoodLife, “Arshi’s family is upset about these blackmail claims. Yes, they did talk at times but she never blackmailed him. We are planning to send a showcause notice for defamation to Vikas Gupta and his mother, Sharda. We have consulted Advocate CA Ambani of Goregaon (East) in this matter. They are guiding us in the matter. Arshi Khan’s family is from Bhopal and does not know how to handle such matters.”

Lakshmi Menon reveals she is in a romantic relationship