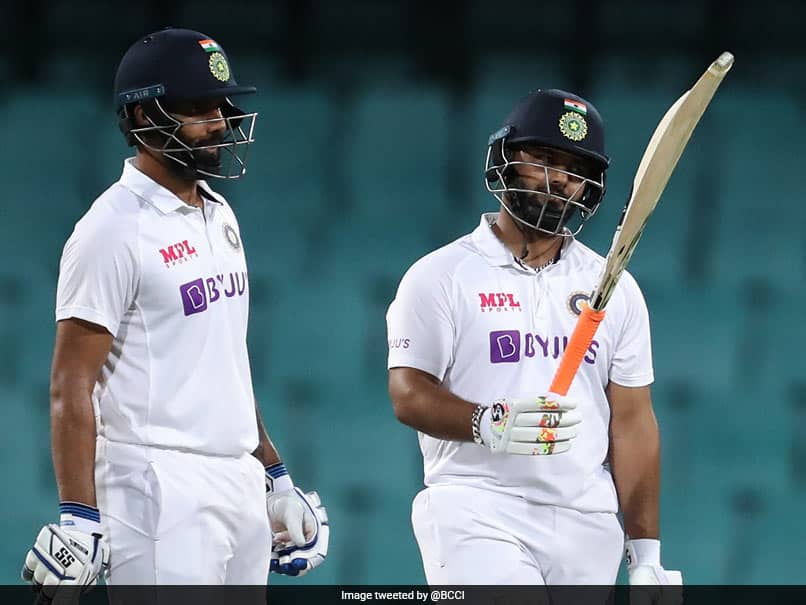 The legendary Sunil Gavaskar feels the Indian team management should prefer an aggressive Rishabh Pant over a technically sound Wriddhiman Saha for the wicket-keeper’s role in the four-match Test series against Australia, starting on Thursday. Gavaskar, the fastest to reach 10,000 Test runs, said that with a blistering 73-ball 103-run knock in the second warm-up game under his belt, Pant will give India more flexibility in the first Test, the only day-night game, to be played in Adelaide.

“It is going to be a tough one for the tour selection committee because Rishabh played in all the 4 Test matches four years ago. He also got a hundred and seemed he got under the skin of the Australian players with his chirping behind the stumps.

“…when you just came off a hundred few days earlier, he would be the choice of the management I think,” Gavaskar said.

Gavaskar said he preferred Pant over a more-accomplished keeper in Saha, as Australian pitches are not so demanding when it comes to keeping wickets.

“When you are playing on pitches where the wicketkeeper has to stand upto the stumps, where the ball turns out a little bit that’s when you tend to take your best wicketkeeper, in which case Wriddhiman Saha would be the obvious choice,” he explained.

“But here, India will be having pacers where you can stand behind and have little more time, my feeling is that they will go for Rishabh,” Gavaskar said while previewing the series named after him and Allan Border to be telecast live by Sony Networks.

Both Gavaskar and Border batted for Shubman Gill over Prithvi Shaw to open along side Mayank Agarwal in the series.

“…India is a little bit shaky at the top of the order. They don’t know who they are going to go with. Mayank Agarwal is of course a certainty. But who’s the other opener — Shubman Gill or Prithvi Shaw?” said Gavaskar.

“So with uncertainty at the top, they would like to strengthen their batting and so Rishabh Pant will play. I am hoping he (Rishabh) plays at 6 because then that will allow you to pick 5 bowlers to try and get 20 Australian wickets,” he added.

“I’ve been in Sydney the last couple of days, watching the Indian team against Australia A. I was impressed with Gill,” said the former Australia captain.

“I really think he’s got something about him, his technique. I know he’s young so he can play a few rash shots here and there, but he looks a seriously good player, this kid. He would be my pick out of the guys I saw.

“I know you guys (rate) Shaw but it seems to me like he plays a shot-a-ball. Against the new ball, he looks good on flat tracks, but in Australia, you’ve got to be a little bit more watchful about your shot selection,” he added.

Gavaskar agreed with Border and said Shaw needs to get back to the drawing board and work on his weaknesses — inconsistency and poor shot selection.

“I do agree with AB (Allan Border). I think he’s (Shaw) got to spend a little more time assessing his batting. Because as an opening batsman, you’ve got to give yourself time to see what the pitch is doing, see what the bowlers are doing,” he said.

“Trying to bat the way he’s batting at the moment is not going to make him a consistent player. Yes, he’s going to make runs once in a while but he’s got to tighten up his defence.”

Gavaskar, however, was pretty sure about the other opener, saying Mayank Agarwal is the player to watch out for in the series.

“For me the player to watch out for from India will be Mayank Aggarwal. He came to Australia for the last couple of Test matches two years ago and he actually, showed the way because till then India had not got any start,” the Gavaskar said.

“He showed how to tackle Nathan Lyon. He has gone from strength to strength. Look at the season he had last year, where he scored a double hundred against South Africa.

“He got back-to-back double hundreds if I’m not mistaken (two double-centuries in three matches). So he’s the guy I really am looking forward to in this series,” Gavaskar added.

“Good Evening From The Gabba”: Ravichandran Ashwin Has Last Laugh In Banter With Tim Paine

Australia vs India, 4th Test: Justin Langer’s “Lesson From The Series” Is To “Never Ever Underestimate India”

Thailand Open: Saina Nehwal Crashes Out In First Round, Kidabmi Srikanth Eases Into Second Round

AUS vs IND: Ajinkya Rahane Says “Don’t Know How To Describe This Victory”, Credits Goes To Each Player