Australia vs India, 3rd Test: ”Bit Of Relief” For Us To Get Rid Of Rohit Sharma, Says Australia Head Coach Justin Langer 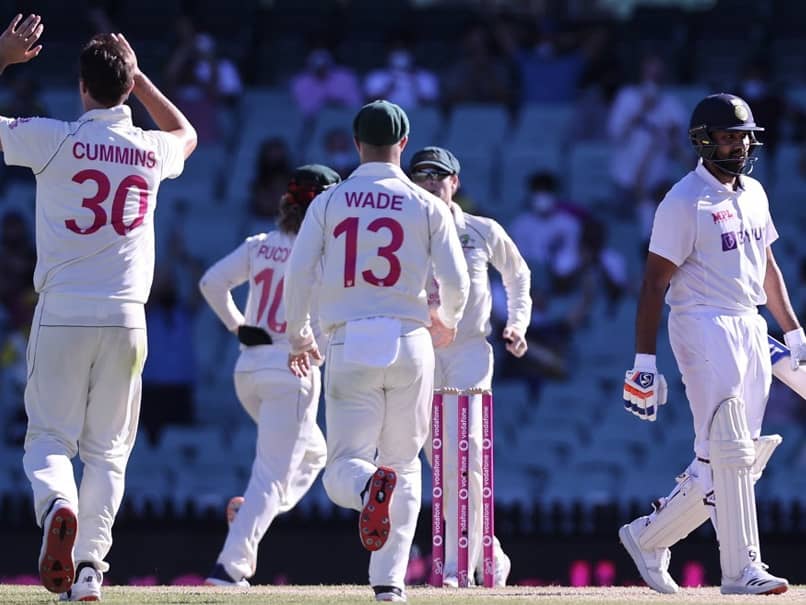 AUS vs IND: Rohit Sharma was dismissed for 52 after scoring his 11th Test half-century.© AFP

Australia head coach Justin Langer on Sunday said that they are in a great position in the ongoing third Test against India, after dismissing opening batsman Rohit Sharma before the end of the fourth day’s play at Sydney Cricket Ground (SCG). Australia are in a commanding position in the third Test after setting a 407-run target against India to win the match. Rohit played a knock of 52 runs studded with a six and five fours before being sent back to the pavilion by Pat Cummins. At stumps on day four, India were at 98/2 with Cheteshwar Pujara and Ajinkya Rahane unbeaten on nine and four runs respectively.

“It is a bit of relief for us to get rid of Rohit Sharma. He is a world-class player and we know he is one of the great all-time ODI players. So, if he was out there he gonna keep scoring runs quickly. There is very little on this wicket so we gonna squeeze really hard and keep the pressure on. We just need to keep doing what we are doing. A little bit of invariable bounce and hopefully that plays a part for us,” Langer said in the virtual press conference after the conclusion of play on day four.

Coming in to bat at the final session of the day, both the openers Rohit and Shubman Gill showed great intent against the Australian pace-battery on the deteriorating pitch of the SCG. The duo accumulated the second 50-plus opening stand in the match. The openers provided a formidable start to the visitors as they added 71-runs for the first wicket. Pacer Josh Hazlewood scalped Gill (31) as he was caught behind the stumps by skipper Tim Paine.

Langer feels that spinner Nathan Lyon will have a role to play on the final day of the Pink Test as the wicket will support spin on Monday.

“It is spinning a little bit. It’s been a quite slow turn. I mentioned all the players this morning and particularly made the point tonight. I thought he bowled really well in the first innings without luck. He might get a little bit more luck in the second dig but he will play a big part,” he said.

Talking about batsman Matthew Wade, who failed to score big runs in both the innings after getting a start, Langer said Wade will be disappointed with his shot selection but the team has ”a lot of faith” in him.

“We are in a great position as a team in this Test match. He would be disappointed personally but we have a lot of faith in Matthew Wade that’s why he is playing. He opened the batting in the first two Test matches, he was selfless in that and took on that role and played some good innings. In first innings here, he looked absolutely a million dollars and got out to a shot that he would be disappointed about,” Langer said.

Rare picture of Superstar Rajinikanth when he was a bus conductor