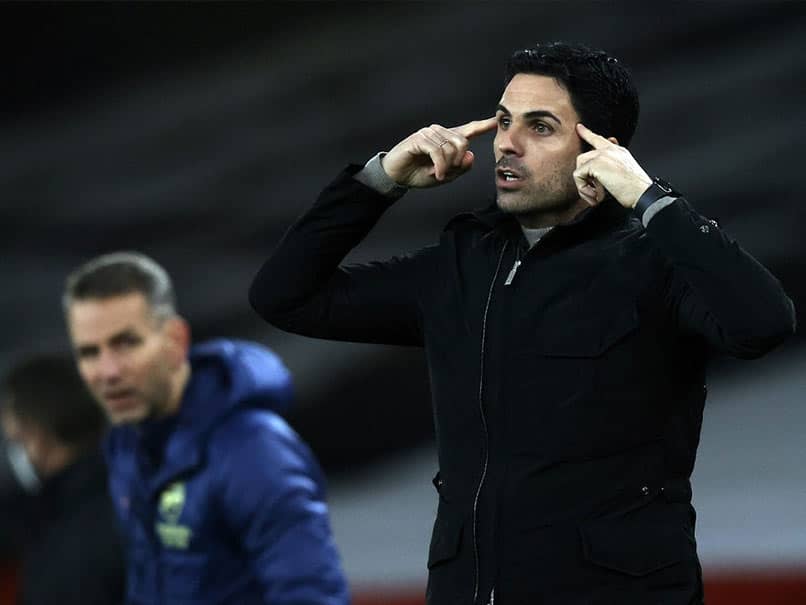 The pressure on Mikel Arteta has eased after consecutive wins against Chelsea and Brighton.© AFP

Mikel Arteta says Arsenal’s priority in the January transfer window is to trim their bloated squad as he seeks to build on a mini-revival at the Premier League club. The Gunners were able to offload Emiliano Martinez and Henrikh Mkhitaryan in the summer window while Matteo Guendouzi and Lucas Torreira departed on loan.

But forgotten man Mesut Ozil remained at the Emirates along with Shkodran Mustafi and Sead Kolasinac, who have barely featured in the Premier League this season.

Arsenal have been linked with a loan move for Real Madrid playmaker Isco next month, but first of all technical director Edu will attempt to raise funds by moving on those who are surplus to requirements.

“There are some players that are going to go on loan and going to leave and that is the priority at the moment,” Arteta said ahead of Saturday’s trip to West Brom.

“We cannot sustain the numbers that we have in certain positions and we are looking to do that, and then we will see if we have the right opportunity in the positions where we need some more help.”

The pressure on Arteta has eased after wins against Chelsea and Brighton lifted Arsenal to 13th in the Premier League table following a miserable run.

Bukayo Saka, who starred in the 1-0 win at Brighton on Tuesday, is expected to be fit for the match against Sam Allardyce’s West Brom.

The teenager was forced off during the latter stages of the victory after a strong challenge, but should recover while David Luiz and Willian, who both tested negative for Covid-19 earlier this week, may return this weekend after a bout of illness.

Allardyce this week called for a “circuit-breaker” in the Premier League as coronavirus cases spike in Britain but league bosses said the competition would continue as planned.

“I think we have shown the system is working,” said Arteta. “In the last week or so something has happened and we will have more restrictions and more tests to try to be as efficient as we were before and we will see, but I think it can work and we can carry on.”

KL Rahul, Athiya Shetty Join Robin Uthappa And His Wife For A Get Together. See Pics

ISL: 10-Man FC Goa Hold On For A Point Against Kerala Blasters FC

India vs England: Ben Stokes Boards A Flight To India Ahead Of Test Series. See Pic

Hailey Baldwin & More Stars Swear By This Mineral Sunscreen That Has Over 12,800 Reviews